On Tuesday I took the brave/scary step of replacing the pickups in my bass. It was my first attempt at soldering and it went pretty well. I really liked the sound of my bass (1998 American Fender P-Bass), but it wasn’t quite as punchy as I wanted.

My ridiculous number of hours spent ogling gear at guitar stores paid off in the decision making process. I’ve played a fair number of basses, and the one that had that elusive punch I was searching for was the Music Man Stingray. While very similar to a p-bass (both were designed by the great Leo Fender), the Stingray has a monster pickup with huge magnets. I never really put that together until much later when I played a Fender Mark Hoppus Signature bass at Twin Town. It was loaded with a Seymour Duncan SPB-3 Quarter-Pound pickup. Fortunately they also had an American P-Bass there to compare with. After that, I was sold on the new pickups. So far I’m very pleased with the result. 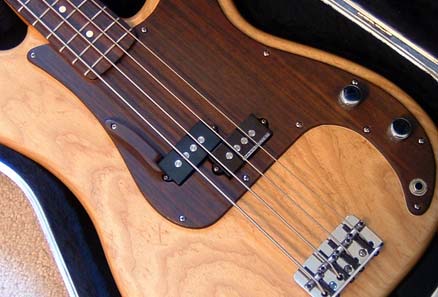 I was sitting on the couch the other day and, as I looked at Megan using her computer, I thought perhaps we should not have been so quick to sell her desk.